With the introduction of larger and heavier 300 mm wafers, semiconductor factories required a significant change in the automation of production lines. They became more automated to increase throughput, to automate material delivery to each equipment by using robots (Automated Guided Vehicles or AGVs), to refine process controls and to get accurate analysis to track equipment performances. Several standards were specified, known as GEM300 (or SEMI300) because their creation and adoption coincided with the first 300 mm wafer factories. However, there are no features in these standards specific to the wafer size. The new features that GEM300 has introduced in the semiconductor industry were so essential that they were adopted by all the semiconductor industry worldwide within a few years

SECS/GEM were the initial standards for configuring and controlling the communication flows between the factory and the equipment. GEM300 completes these to empower equipment autonomy on material entrance with automated carrier delivery and removal, validation of material identification ensuring that the correct material has been delivered to the machine. Afterwards, factories specify the process job to be performed on the equipment and follow process steps. Last but not least, substrates are tracked inside the equipment, and the efficiency of the equipment is measured and analyzed.

The main challenges for equipment suppliers are first to understand which GEM300 functionalities are applicable on their equipment, secondly, to ensure that their implementation of GEM300 is compliant with the SEMI standards, and finally to communicate with the Manufacturing Execution System (MES or Host) during deployment and tool acceptances in fabs (Fabrication Areas). Of course, all of that must be integrated in a short delay to ensure the process or inspection tool is in the right time to market.

Five major functions are the basis of GEM300 as described below: 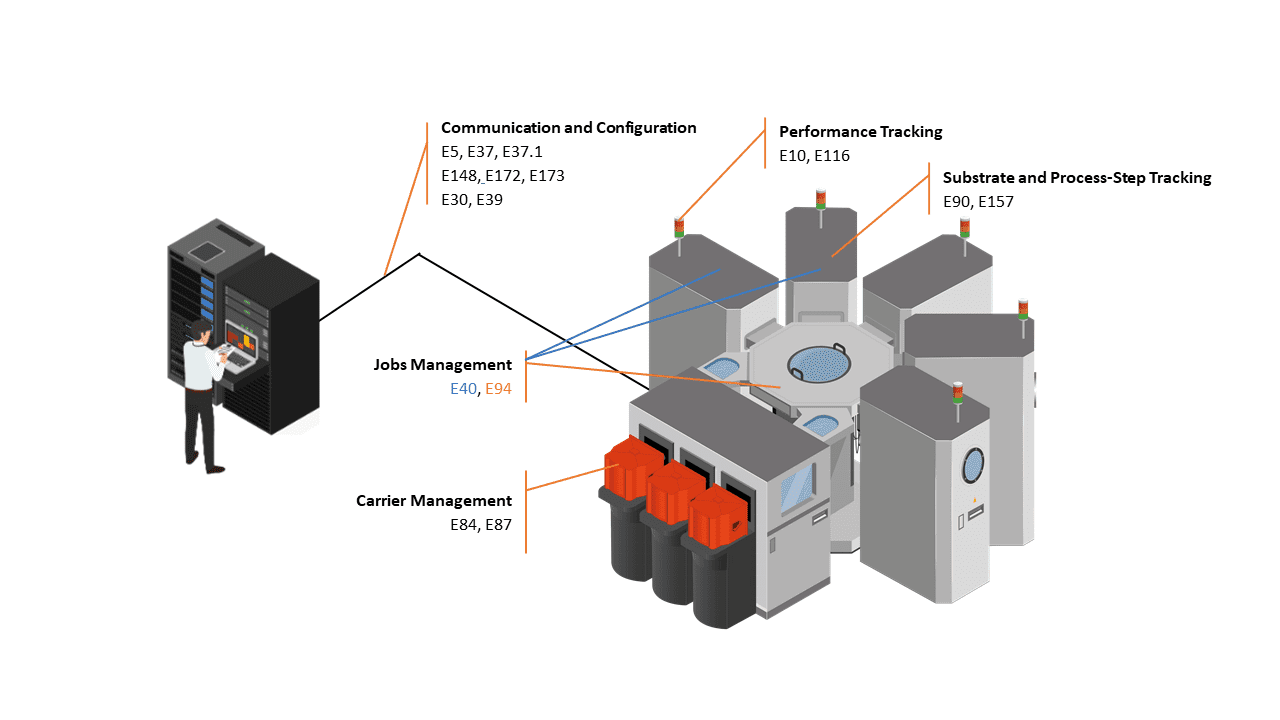 Agileo Automation has a team of experts with a huge experience in SECS/GEM connectivity. Our teams have developed control and connectivity software for 30+ different semi-conductor and PV tool models deployed in 50+ fabs in 15 different countries. We provide libraries, services, and supports to efficiently integrate your SECS/GEM and GEM300 interface in the factory automation.

For GEM300, our developments are based on a third-party library provided by our partner, Cimetrix: CIM300™ toolkit. CIM300 enables integrators to implement GEM300 standards-compliant interfaces with the minimum amount of time and cost.

GEM300 with the A²ECF framework

Agileo Automation Equipment Controller Framework (A²ECF Semi) dramatically reduces the development of an equipment software with GEM300 compliance. With its support of either GEM or GEM300 together with its drivers for major robotics loaders and FOUP openers, OEMs can focus on their core business and deliver tools on time with built-in connectivity.

Do not hesitate to get in touch with us to help you to: