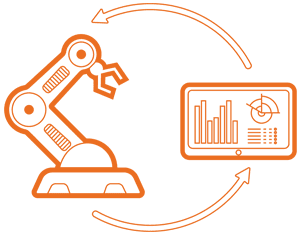 Advanced Manufacturing is a cross-disciplinary field of application. It is also sometimes called Closed Loop Manufacturing.

It consists of carrying out process operations (machining, oxidation, deposition of material, cleaning, heat treatment, etc.) on parts while measuring certain physical parameters directly or indirectly during processing. The aim is to obtain information about the part being manufactured such as temperatures, diameters, thicknesses, distances, etc. This is known as in-situ metrology with a feedback loop that makes it possible to control the process to the measurement. The measurement can be carried out either continuously or intermittently at certain stages of the process. Non-destructive testing (NDT) technologies are used to avoid damaging the product during the manufacturing process.

Advanced Manufacturing is sometimes more than a necessity to increase the control of manufacturing processes, particularly when the process is not entirely repeatable due to difficulties in process characterization, machine calibration or product variability.

Cooking explanation: To cook a roast, the recipe recommends to put it at 200 °C for 1 hour per kilo. Depending on the shape of the roast (rather long and thin or rather short and thick) and the characteristics of the oven (power, regulation, thermal inertia,...) the recipe instructions will not give the same result. An "Advanced Manufacturing" solution is to put a temperature sensor in the roast and to stop the oven when the core temperature, corresponding to the desired cooking, is reached.

The advantages of Advanced Manufacturing for production machines are multifaceted:

Agileo Automation has implemented Advanced Manufacturing projects by developing applications integrating process and measurement based on the A²ECF framework:

The architecture of the A²ECF framework fits itself perfectly to this type of project with the possibility to easily integrate in the tree of controlled devices the process part and the metrology part and to make them interact in the business layer (business logic).